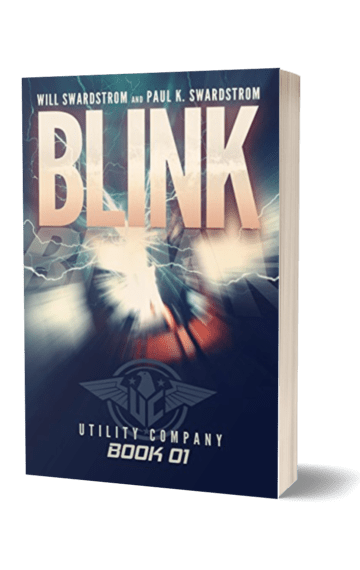 “The Swardstrom Brothers’ supernatural sci-fi world of Blink is a phenomenal meshing of classic pulp and contemporary Fringe. This is the beginning of something grand.”
– Daniel Arthur Smith, author of Hugh Howey Lives

It was clear, the image projected in these panels was not a reflection–it was a projection from the other side. Whatever or wherever that was.
Smith kept his gaze locked on the other’s eyes for about ten seconds, unmoving until something happened.
He saw himself blink.

Agent Smith and the agents of The Utility Company are tasked with the jobs too weird or too strange for other law enforcement agencies. When portals start opening up all around the country from an alternate universe, it’s up to Smith to not only figure out what’s happening, but to put a stop to it.

For Nik Davidson, his home and family are at the heart of the interdimensional conspiracy. By the time Agent Smith knocks on his door, Nik’s whole family is in danger. What will Agent Smith and Nik do when the fate of two different worlds are on the line? What do they do in order to save those closest to them? Who do you trust when those looking back in the mirror may not have your best interests at heart?

Blink is a thrilling introduction to Agent Smith and the adventures of The Utility Company by brothers Will and Paul K. Swardstrom.