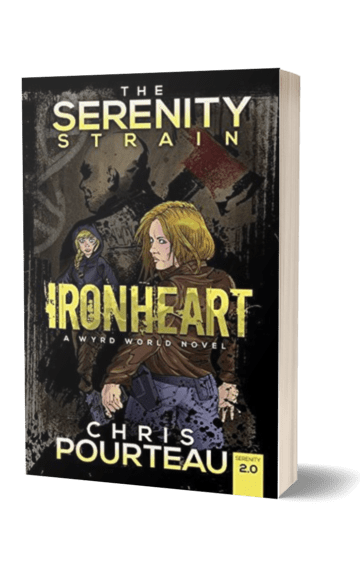 The dark, gritty dystopia of Escape from New York meets the isolated heroism of The Omega Man and the horrific reality of C.H.U.D. in this second Serenity novel.

In The Serenity Strain: Stormbreak, three massive hurricanes ended the world. Six psychopaths escaped prison. And one mystical temptress named Id slipped into our reality. Now, the storms have passed. Houston’s stunned survivors are waking up, wandering out of their broken homes, and looking for someone to show them the way.

In Ironheart, heroes thrown together by circumstance face their greatest fears. Lauryn, Megan, Stavros, and Colt–a new champion from another reality–stand together as Id, Marsten, and their army of escaped prisoners move south to enslave the Bayou City. And now a new threat emerges as ravenous creatures born from man’s own vanity pour forth from another corner of the multiverse.