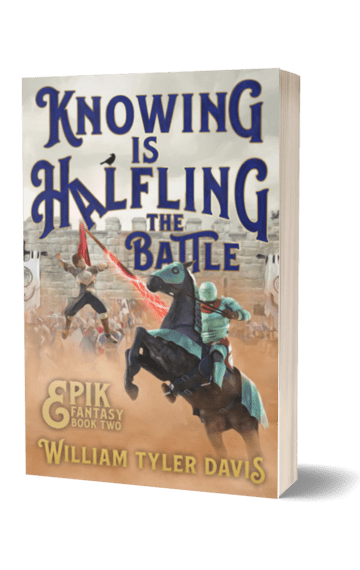 A city under siege. A halfling knight. One Epik Quest.

Epik thought he had found what he was looking for – magic, adventure. He saved an entire kingdom. But at what cost?

Without his mentor, Gabby, learning magic seems an impossible feat. And becoming a knight is proving harder than he ever expected.

Once again, the city is under attack. A new enemy rises, undermining the ten years of peace and prosperity promised to Dune All-En. Epik must heed the call. He and his usual band of misfit souls – Todder, Myra, and Gerdy – quest across the realm. But what they find in King’s Way shakes them to the core. A kingdom supposed to be seething with dark magic seems oddly vacant of much magic at all.

Featuring magical jousts to rival both March Madness and WrestleMania III, grandiose feasts that many in Westeros would envy, and a cast of quirky characters that stick with you well after reading, Knowing is Halfling the Battle is a rip-roaring romp through the Arthurian realm of knighthood. Join Epik in his second adventure.