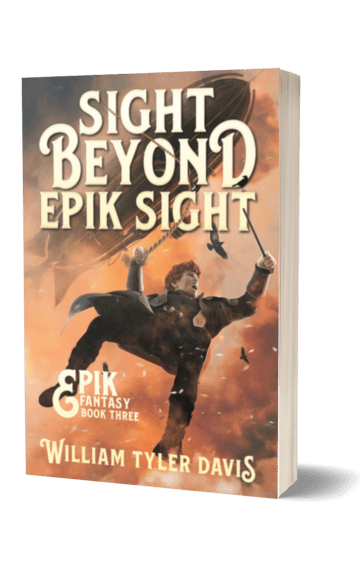 The realm is at war… again. Epik and his friends are splintered across the continent.

The halfling has set off in search of guidance from a mysterious coven of witches – known throughout the realm as either villains or saviors (depending on whom you ask). And while Gerdy struggles to escape the clutches of the Grand Sovereign, Brendan and his crew come face to face with new technology in the form of a monstrous steam-powered train.

The Grand Sovereign is holed up in his castle, fortifying his defenses. He’s short on magical power. But not for long.

His evil plan is set in motion.

Featuring airships, steam-driven locomotives, and the answer to these two questions: Can Epik trust his father? And can Epik save the kingdom – no, the realm – one more time? Or has the halfling finally met his match? Wait, was that three questions? Four?