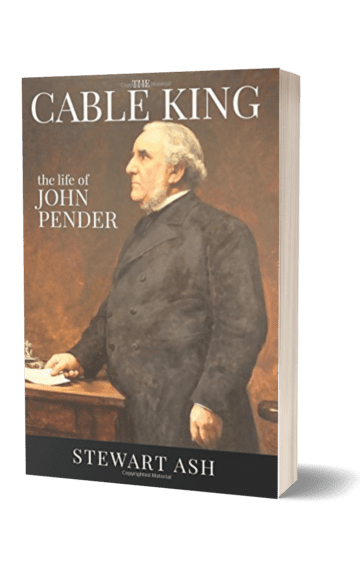 John Pender was a key figure in one of the 19th century’s most important technological enterprises: the interconnection of the British Empire through undersea telegraph cables, a network that Tom Standage has called the Victorian Internet. Pender exemplified the best that the 19th century could produce, he was a hard-working businessman with concern for the welfare of his staff, and who sought public office to speak for Manchester merchants and Lancashire cotton workers during the Cotton Famine. Always a forward thinker, he saw that telecommunications was destined to be the great development of the second half of the 19th century.

Pender suffered personal tragedy when his first wife died just thirteen months after their marriage, leaving him with an infant son. His second marriage ten years later to the determined and enterprising Emma Denison was a turning point both for his family and the Empire. The electric telegraph caught his interest, and his promotion and organization of the companies that laid the first Atlantic cable were a significant factor in their eventual success. In 1869 he established the first of many cable companies which before his death connected Great Britain to all parts of its Empire and beyond. Awarded many high honours from foreign governments, he was finally knighted by Queen Victoria in 1888.

John Pender kept his personal life private and this perhaps explains why there has not been a biography of him before now. The Pender family granted Stewart Ash unrestricted access to the family archives, and this book gives us a detailed account of John Pender’s ascent from his humble beginnings in Scotland. A truly remarkable man, he made his first fortune in the cotton trade, then dedicated his life to the development of the undersea cable industry and its rise to pre-eminence, becoming a Member of Parliament in successive governments in furtherance of his dreams.